Age of the ten masters or gurus of Sikhism, a religion which belief on single god that teaches us to doing good throughout life and recognize all human race as one.it all began with the birth of guru Nanak Dev ji in 1469, get through Guru Gobind Singh ji. At the time when tength guru release his soul from this materialistic world in 1708, Guru Gobind Singh ji entrust his designation of guru to the holy Sikh scripture, dhan shri Guru Granth shaib ji.
Sikhs and other communities respects ten gurus of Sikhism as the incarnation of one divine gleam that flow from each guru to his inheritor. That divine gleam now live in the holy scripture dhan Guru Granth Sahib ji . with my small mind and knowledge i ll try to tell something about ten gurus i hope you find this article useful as per you seen in image i engraved ten gurus on corian and back lit it i will describe how i make it in following after describing about ten gurus.

Guru Nanak Dev ji, known as founder of Sikhism and mention the theory of one God. his father name is Kalyan Das ji (Mehta Kalu ji) and mother name is Mata Tripta ji, and the brother of Bebe Nanaki. He was wedded to Sulakhani ji and had two sons, Siri Chand ji and Lakhmi Das ji.
Guru Nanak Dev ji was brought into this world at Nankana Sahib, Pakistan, on Oct. 20, 1469. He was ceremonial made guru in 1499 at about age 30. He merge his soul in Kartarpur, Pakistan, on Sept. 7, 1539, at the age of 69.

Guru Angad Dev ji organize the saying and writings of guru Nanak Dev ji and establish the Gurmukhi script. his father name is Pheru Mall ji and mother name is Mata Daya Kaur (Sabhrai) ji. He was wedded to Mata Khivi ji and had two sons, Dasu ji and Datu ji, and two daughters,bibi Amro ji and bibi Anokhi ji.
The second guru was brought into this world at Harike, India, on March 31, 1504, became guru on Sept. 7, 1539, and merge his soul in Khadur, India, on March 29, 1552, 48 years old.

Guru Amar Dasji reject caste system with the help of langar, pangat, and sangat.He was brought into this world at Basarke, India, on May 5, 1479, his father Tej Bhan ji and mother Mata Lakhmi ji. He wedded to Mansa Devi and had two sons, Mohan ji and Mohri ji, and two daughters, Dani ji and Bhani ji.
He embellish the third guru at Khadur, India, on March 26, 1552, and merge the soul at Goindwal, India, on Sept. 1, 1574, at the age of 95.

Guru Raam Das ji take up the unearthing of the Sarovar in Amritsar, India.He was brought into this world at Chuna Mandi (Lahore, Pakistan), on Sept. 24, 1524, his father name Hari Das ji Sodhi and mother name Mata Daya Kaur ji. He wedded Bibi Bhani ji and they had three sons, Prithi Chand ji, Maha Dev ji and Arjun Dev ji.He embellish the fourth guru at Goindwal, India, on Sept. 1, 1574, and merge the soul at Goindwal on Sept. 1, 1581, at the age of 46.

Guru Arjun dev ji fabricate the Golden Temple (Harmandir Sahib) in Amritsar, India, and organized Adi Granth in 1604.He was brought into world at Goindwal, India, on April 14. 1563, to Guru Raam das ji and Mata Bhani ji. He weded Raam Devi, who was issueless, and Ganga ji, and they had one son, Har Govind ji.He was emblleish the fifth guru at Goindwal on Sept. 1, 1581, and merge the soul in Lahore, Pakistan, on May 30, 1606, at the age of 43.

Guru Hargobind ji erected the Akal Takhat. He elevated an army and kept ​two swords that represent earthly and divine command. Jahangir detention the guru, who contract a rescue for whoever could remain to his robe.The sixth guru was brought into world at Guru ki Wadali, India, on June 19, 1595, and was the son of Guru Arjun dev ji and Mata Ganga ji. He wedded Damodri ji, Nankee ji, and Maha Devi ji. He was the father of five sons, Gur Ditta ji, Ani Rai ji, Suraj Mal ji, Atal Rai ji, Teg Mall ji (Teg Bahadur), and one daughter, Bibi Veero ji.He was become the sixth guru at Amritsar, India, on May 25, 1606, and merge the soul at Kiratpur, India, on March 3, 1644, at the age of 48.

Guru Har Rai ji, is seventh guru of the 10 gurus, generate the Sikh faith, conserved a troopers of twenty thousands as his personal guard, and constructed both a hospital and zoo.He was birthed in Kiratupur, India, on Jan. 16, 1630, and his father Baba Gurditta ji and mother Mata Nihal Kaur. He wedded Sulakhni ji and was the father of two sons, Ram Rai ji and Har Krishan ji, and one daughter, Sarup Kaur ji.seventh guru embellish at Kiratpur, March 3, 1644, and merge the soul at Kiratpur, Oct. 6, 1661, at the age of 31.

Guru Har Krishan ji entitled with guru gaddi at the age of 5. He was birthed in Kiratpur, India, on July 7, 1656, and his father Guru Har Rai and mother Mata Kishan (aka Sulakhni).He entitled guru on Oct. 6, 1661, and merge the soul during smallpox disease at Delhi, India on March 30, 1664, at age 7.

Guru Teg Bahadar ji, was unwilling to leave meditation and designated as guru. when all is said and done he immolate his life to save Hindu kashmiri Pandits from compulsory change to Islam.He was birthed in Amritsar, India, on April 1, 1621, his father Guru Har Govind and Mata Nankee ji. He wedded mata Gujri ji, and they had one son, Gobind Singh ji.He embellish guru at Baba Bakala, India, on Aug. 11, 1664, and merge his soul at Delhi, India, on Nov. 11, 1675, at the age of 54.

Guru Gobind Singh JI give birth to Khalsa panth. He immolate his father, mother, sons, and his own life to rescue Sikhs from compulsory change to Islam. He finalize the guru Granth sahib ji, presenting upon it the designation of living and final guru of sikhs. He was birthed in Bihar, India, on Dec. 22, 1666, and his father Guru Teg Bahadar and mother Mata Gujri ji. He wedded Jito ji (Ajit Kaur), Sundri, and Mata Sahib Kaur ji and had four sons, baba Ajit Singh ji, baba Jujhar Singh, baba Zorawar Singh ji and baba Fateh Singh ji. He entitled as the 10th guru at Anandpur, India, on Nov. 11, 1675, and merge the soul at Nanded, India, on Oct. 7, 1708, at the age of 41.
i ll try to describe all ten gurus in minimum words count if i ll start to write about them in brief i cannot write about one guru in my life.now i will describe how i engraved ten gurus imaginable picture on corian.

Its mainly use is as a corian countertops(what is corian countertops) surface, now a days so many companies making solid surface.LG and samsung one of them.it has property to translucent light white corian originated by dupont mainly in different thickness.we can purchase 12mm and 6 mm from market it is eaisly available now a days and several  corian color options are there too corona or corian cutting is hard task to do i can describe in following steps how to do it properly According to need of your home interior for corian work you can contact us.
usually artist like me gaze on latest trends, estimating the price value of trend which guiding the market and which things are gaining access to the business. usually, when a new trend is in we uses 3d softwares like artcam corel etc and start designing these latest things.this design made of 3d software give command into another software which make programmed to use by cnc machines.firstly i searched high quality pics on google or another search engines like pint-rest etc after that i choose one of the best picture in position or in quality.Then after enhancing picture quality on Photoshop i ll import that pic in 3d software to make 3d model.

after exact measurement we start to create basic drawing we can create in given size we make 2d drawing first according to sizes after that we execute 3d models in which we describe thickness of design and size or make things according to client wish.

ENGRAVINGarea of a circle used at house

after selecting material and design we start to engraved or embossed design on corian sheets for example we take 12mm sheet of corian we can engraved it only 7mm to make design left material is used as base of design in sheets which give strength to sheet and design itself.

On corian wall there is no need of paint job otherwise if we choose another material like mdf or wpc only then we required paint-job .When frame hanged on wall we start sanding of design to give good finish because paint finish depend on base material finishing if base material is not properly finish paint will not look good in quality after completion of sanding paint-job started as per client choice of color scheme or duco , pu and polyester paint we can do depend on client budget polyester is expensive as compare to pu and duco. corian do not required such paint-job it has almost 40 shades.

in some of our designer wall we use l.e.d lights to back-lit and to enhance the mystic look of given wall it raise grace of wall as well as costing of wall too. color of light we choose according to color scheme of wall or interior designer consult client to which color is suitable.

Droping a surprise link have a look https://youtu.be/d-GGj8T14AM

i hope you got some good information from this article kindly share with others too.Feel free to comment.If you have any question regarding this article. you can drop message in comment section or mail me @ rmndeepcad@gmail.com
thanks and warm regards
from rmndeep g 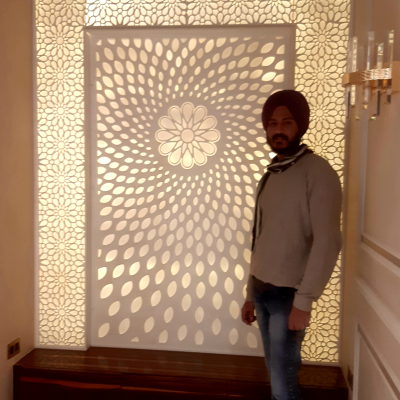 Corian photos how is it made ?

WhatsApp us for more details.